In Paris, on November 13, 129 people were killed in coordinated bombings and shootings for which the Islamic State claimed responsibility. Although this is only the latest in a series of such attacks, it has drawn a different sort of attention than the massacres in Suruç and Ankara that killed 135 people. The lives of young activists who support the Kurdish struggle against ISIS—so far the only on-the-ground effort that has blocked the expansion of the Islamic State—are weighed differently than the lives of Western Europeans.

The same goes for the lives of millions who have been killed or forced to flee their homes in Syria. European nationalists lost no time seeking to tie the attacks in Paris to the so-called migrant crisis. British headlines proclaimed “Jihadis sneaked into Europe as fake Syrian refugees,” alleging that a passport found with one of the assailants belonged to a refugee who passed through Greece. These opportunists hope to use the blood still wet on the streets to anoint their project of locking down Fortress Europe.

Ironically, many of the people attempting to enter Europe from the Middle East are fleeing similar attacks orchestrated by ISIS. This is why they have been willing to risk death, crossing border after border to reach an unwelcoming Europe. Cutting off their escape route would trap them in territory controlled by ISIS, arguably increasing the resources of the Islamic State and indisputably exacerbating the frustrations that drive people to cast their lot with Islamic fundamentalism.

Surely this was clear to the people who planned the attacks. It may even have been among their objectives.

ISIS to the East, borders to the West: the refugee’s dilemma.

There is a chilling symmetry between the agendas of the nationalists of Europe and the fundamentalists of the Islamic State. The nationalists wish to see the world divided into gated communities in which citizenship serves as a sort of caste system; European history shows that in a world thus divided, the ultimate solution to every problem is war. The fundamentalists, for their part, hope to assert Islamic identity as the basis of a global jihad.

In this regard, the only real difference between ISIS and the European nationalists is over whether the criteria for inclusion in the new world order should be citizenship or religion. Both ISIS and the nationalists want to see the conflicts of the 21st century play out between clearly defined peoples governed by rival powers, not between the rulers and the ruled as a whole. Both want to force the refugees to take a side in the war between Western governments and the Islamic State rather than participating in the sort of grassroots social change once promised by the Arab Spring.

Of course, the tightening of Fortress Europe and the next wave of airstrikes will be promoted as a way to keep Europeans safe from foreign barbarians, not a means of escalating global conflict. But can borders protect against attacks like the ones in Paris? Has the War on Terror made the world a safer place? 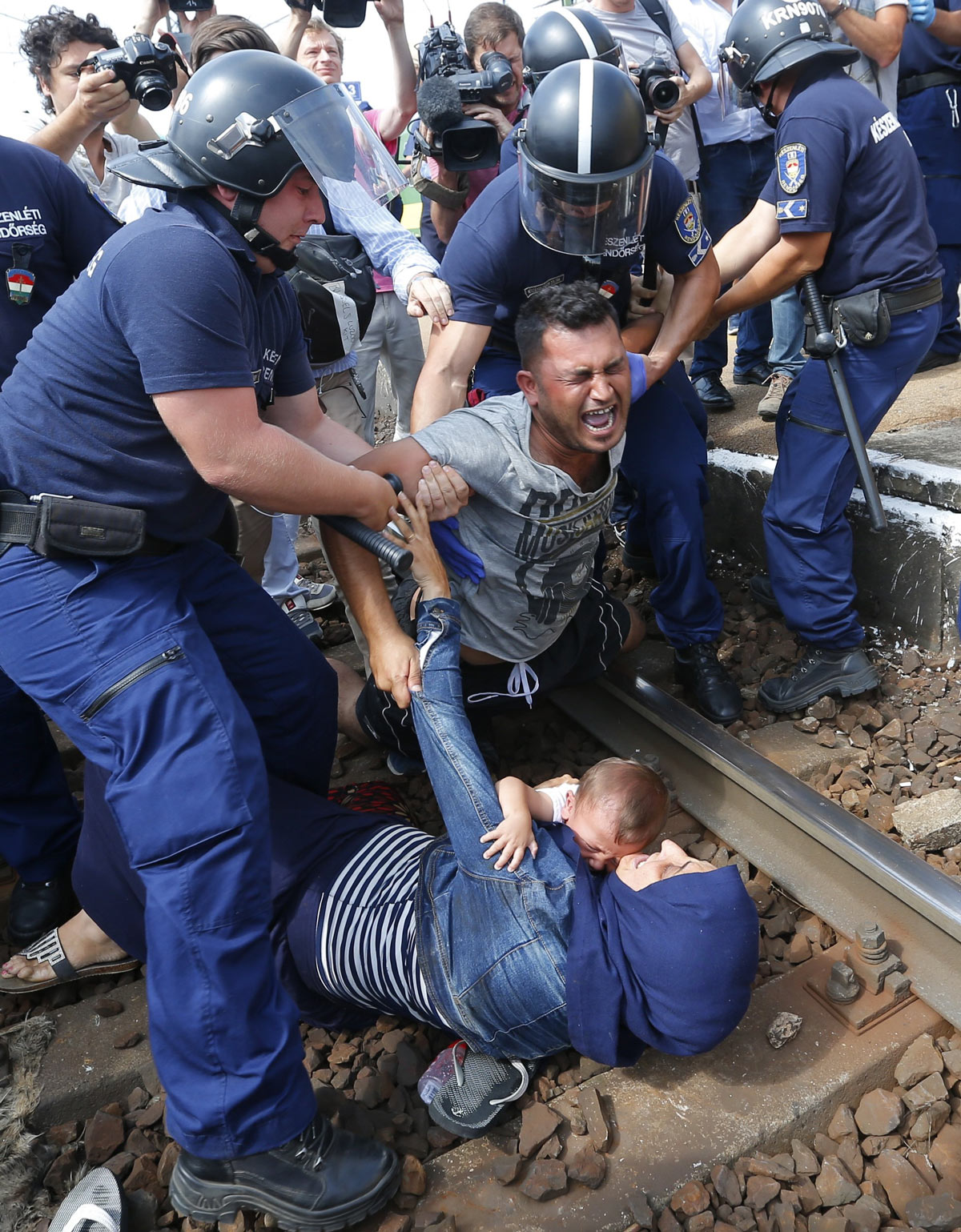 Borders: the glue that keeps us apart.

Let’s go back to September 11, 2001, when al-Qaeda carried out attacks in Manhattan and Washington, DC. In response, then-President George W. Bush committed the United States to military invasions of Afghanistan and Iraq intended to “make the world safe for democracy,” rhetoric taken from another President who sought to justify a war to end all wars while demonizing immigrants. One of Bush’s justifications was that by occupying these rogue states, the US military could disable the staging areas from which acts of terrorism were coordinated. The Bush administration was proposing to protect US citizens by means of the same indiscriminate violence that had produced so much resentment against them in the first place.

Anarchists didn’t buy it. In response to the September 11 attacks and the military operations that followed, we blanketed walls across the United States with posters proclaiming Your leaders can’t protect you, but they can get you killed. 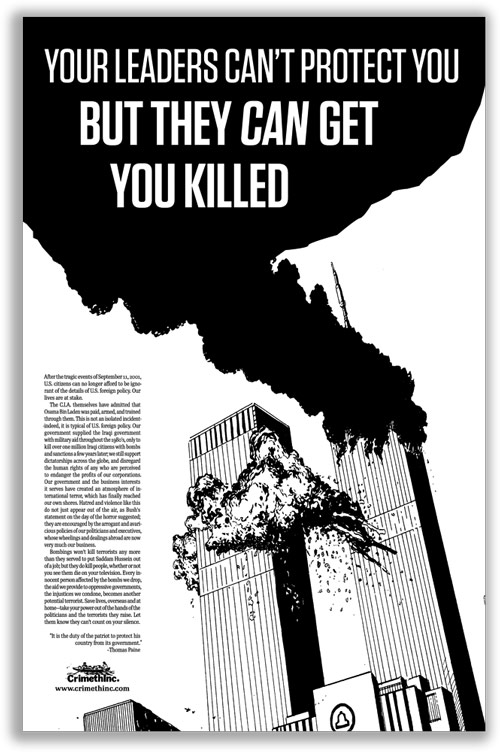 As we predicted, the occupations of Iraq and Afghanistan only destabilized the Middle East, fostering new generations of embittered Islamic fighters. Just as Al-Qaeda was originally funded and trained by the CIA, today ISIS is armed with the very military equipment sent to Iraq to impose US control of the region. As we wrote in 2006 in Rolling Thunder #3 [9MB PDF], the Bush administration could hardly have been more effective at generating Islamic resistance if that had been its explicit goal:

“Mere world domination is no use to a repressive regime. As soon as there are no barbarians at the gates to point to as the greater of two evils, the subjects start getting restless—witness the decade following the fall of the Berlin Wall, when internal resistance grew and grew in the vacuum left by the Communist menace. War-without-end may make people restless, too, but it also keeps them busy reacting to it, if not dying in it, instead of cutting to the root of the matter.

Militant Islam, once a backyard startup company, is finally a global threat, poised to replace the Communist Bloc. Western-style capitalism has extended its influence and control so far that external opposition must now come from previously peripheral corners of the world, such as Afghanistan; a few fanatics from that periphery were enough to inaugurate the new era of Terror-vs.-Democracy back in 2001, but it will take a lot more fanatics to maintain it, and the current US foreign policy will produce them.”

Intensifying security and border controls will only exacerbate the tensions that propel people into the ranks of ISIS from France and Britain as well as in Iraq and Syria. Clamping down the borders around Europe means clamping down on every aspect of life inside them. Special forces have been deployed to back British police; the New York City police commissioner hopes to increase surveillance of communications devices; former French President Sarkozy wants to force everyone suspected of radicalism to wear an electronic tag. This is not just a question of how refugees are treated, but of what life will be like for all of us in an era of ever-increasing state control. 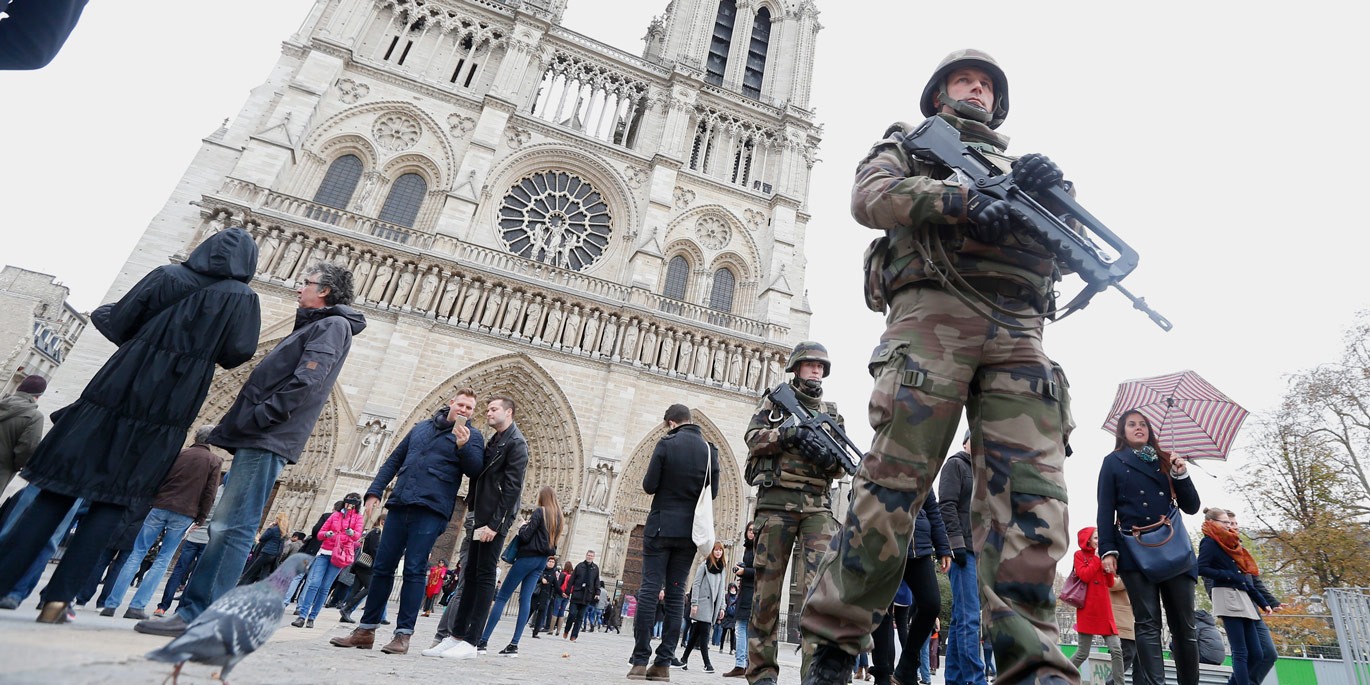 The attacks in Paris are convenient for those who have been struggling to subdue social unrest. When Hillary Clinton says “We are not at war with Islam, we are at war with violent extremism,” the implication is that everyone who stands up for himself against the clampdown will be treated as a violent extremist. In the United States, the National Guard have been deployed three times over the last two years to suppress protests against police murders—it’s not just ISIS killing people. In Europe, where there have been such powerful protests against austerity, 68 anarchists have been arrested on terrorism charges over the past three years—in retaliation for social movement activity, not attacks on civilians.

From Washington, DC and Paris to Raqqa and Mosul, those who hold power have no real solutions for the economic, ecological, and social crises of our time; they are more focused on suppressing the social movements that threaten them. But wherever such movements are crushed, discontent will be channeled into organizations like ISIS that seek to solve their problems through sectarian war rather than collective revolutionary change.

So the clampdown can only make things worse. Tighter border controls won’t protect us from attacks like the one in Paris, though they will go on causing migrant deaths. Airstrikes won’t stop suicide bombers, but they will produce new generations that nurse a grudge against the West. Government surveillance won’t catch every bomb plot, but it will target the social movements that offer an alternative to nationalism and war.

If the proponents of Fortress Europe succeed in suppressing and segregating us, we will surely end up fighting each other: divide and rule. Our only hope is to establish common cause against our rulers, building bridges across the boundaries of citizenship and religion before the whole world is carved up on the butcher’s block of war.

Our only hope is to establish common cause against our rulers across the boundaries of citizenship and religion before the whole world is carved up on the butcher’s block of war.

In this context, we can draw inspiration from everyone who has defied the borders over the past few months, demonstrating that these artificial divisions can be overcome. In August, hundreds of people broke across the border from Greece into Macedonia. In September, when trains supposedly bearing migrants through Hungary to the Austrian border arrived instead at an internment camp surrounded by fences and riot police, the migrants locked themselves inside the train, refused food and water, and ultimately broke through the fence, escaping across the fields to the highway. In October, over a hundred people stormed the Eurotunnel between France and London. Just a few weeks ago, thousands of people repeatedly broke through the police cordon separating Slovenia and Austria. In each of these cases, we see people working together to find the vulnerabilities in the walls that partition up humanity. If it weren’t for their efforts, we can be sure that European governments would have done even less to support refugees.

By breaking open the borders and supporting others who break through them, we can show those fleeing Syria—and Mexico, and all the other warzones of the world—that they have comrades on the other side of the fences. This is our best hope to discourage them from giving up on the possibility of joint solidarity and joining groups like ISIS. Likewise, the more we disrupt the security apparatus and the war machine, the less ISIS will be able to appeal to potential converts by pointing to the harm Western governments are inflicting on Muslims around the world. Every time we do this, we seize the initiative to define the essential struggle of our age: not Terrorists vs. Governments, not Islam vs. the West, but all humanity against the structures and ideologies that pit us against each other. 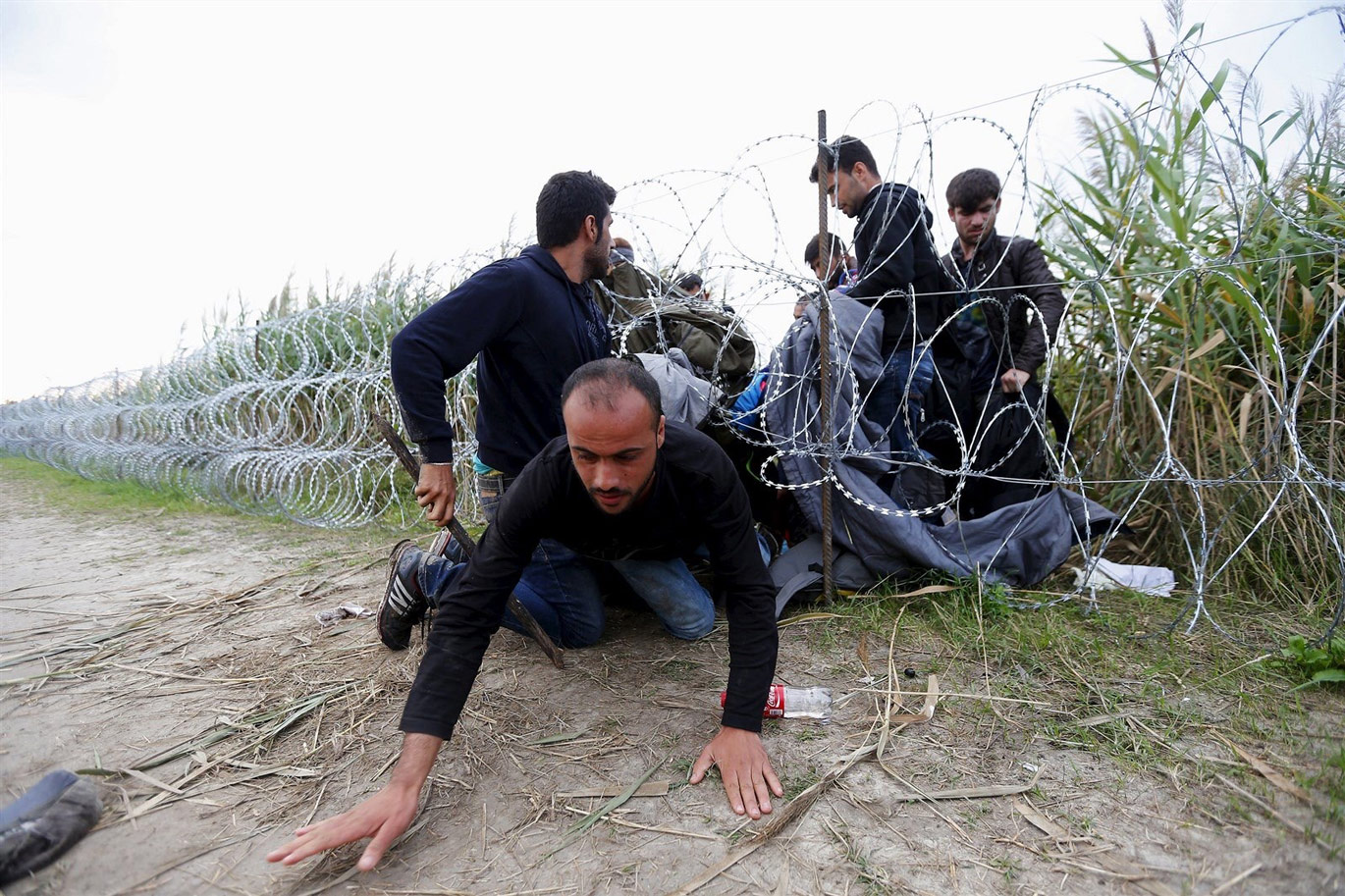 Showing the way for a breakout from the prison society.

CrimethInc. is an anonymous network of anarchists and insurgents, a desperate measure against quantification and computation, a flaming hearse for the hierarchies of our age.